What is a profiling tool, can I use it on a regular angle grinder and which one do I need?

That’s the three most common questions we get asked. Each will be addressed below with a bit more information to help you figure out if one of these tools is what you’re looking for.

We offer two fundamental types of profiler, they both work the same but they are suitable for different applications. Both tools are ideally used on a water fed polisher at a speed under 4500 rpm. They can also be used on a dry variable speed grinder.

We DO NOT recommend these are used on regular angle grinder, they are simply rotating too fast. The speed determines how much control you have of the tool and also effect it’s lifespan as well as the quality of the profile itself.

B – Half bull nose

These are the silver coloured tools most of you will have seen before, they have a M14 thread, a washer on the top and a bearing or washer in the middle/bottom depending on the profile chosen. They are designed for marble or other soft to medium sedimentary stones.

In between the washers/bearings is the profile shape made in steel which has diamond vacuum brazed to the surface. These are generally a relatively coarse #40/50 diamond grit and are ideal for use on softer stone, manmade quartz, limestone, marble, travertine etc.

On marble we’d expect these to produce around 100 linear meters when used wet and about 30% less than that when used dry.

Whilst these profiles can be used on more dense products such as granite, basalt or porcelain. The useful lifespan reduces substantially the more dense the product.

So on a hard 20mm Porcelain these could last as little as 5 linear meters used dry.

B – Half bull nose

This is a heavier duty version of profiling tool. The cutting head is a sintered matrix of diamond much like the cutting edge of a diamond blade. It is more aggressive, longer lasting and much more suited to heavy duty applications and dense or abrasive products. It also cuts much quicker than the vacuum brazed product.

So for sandstone, concrete and 20mm porcelain this is what you need.

They are also more appropriate if you’re a heavy user on softer products like marble, limestone or some softer sandstones. So you’d run this tool first then swap to the vacuum brazed tool for the final finished shaped before easing and polishing. Doing this will increase the lifespan of both tools and long term leads to a lower cost per linear metre.

Do I need a half or full bullnose and what are the other shapes? 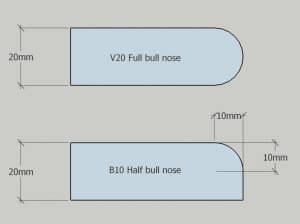 The V profiles are very material size sensitive. They can only be used on a very well calibrated product. So a V20 profiler can be used to cut a full bull nose on 20mm product but the moment the product goes oversized to 21mm/22mm or more it’s very likely it will destroy the tool.

For this reason many people buy the half bull nose tool and cut the top and bottom of the profile in two separate operations, this overcomes batches of problem product that vary in size from 18mm to 22mm in thickness.

If you’re doing a larger profile, certainly on thicker material, it will help speed up the process of profiling if you first cut or grind away some of the bulk of the material before running the profile. Putting a bevel on the edge to be cut just makes things quicker and easier.

On dense stone a turbo cup wheel is ideal for this process.

We also stock the following profile shapes in vacuum brazed only as these tend to be used more often on marble and softer granites.

As always, if you’re not sure what to buy then phone us for advice on the number below.

Get the latest on ats diamond tools right into your inbox